Your Browser Is Incompatible

You are seeing this message because we have detected you are using Internet Explorer 10 (or older) to browse our site. Unfortunately, this means that your browser is too old to display our site properly and that certain areas of the site may display incorrectly or not at all. Please upgrade to the latest version of Google Chrome, Mozilla Firefox, Internet Explorer, Microsoft Edge, or Apple Safari in order to view this site.

The Future of Energy Is Geothermal 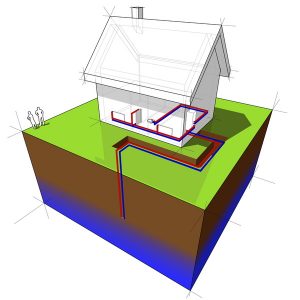 Chances are that the majority of your home is powered by electricity from the local utility company, while some systems also use natural gas. If you’ve thought about using any other energy source to power your home, you’ve likely considered converting to solar power. However, this is not an option for every home, and the initial cost is likely a large deterrent.

When you’re looking to convert your home to a renewable and sustainable source of energy, you may decide to start somewhere else. And since your home heating and cooling systems take up such a large percentage of your bills, we think this is an ideal place to begin. Instead of solar power, have you considered the advantages of geothermal energy?

The heat energy from the earth can be converted to a source of heating, or it may be used to begin the thermodynamic process of cooling. An underground loop system circulates a liquid that absorbs heat to minimize the amount of electricity used for the cooling and heating process.

The Current State of Geothermal Energy

Depending on the study you look at, geothermal energy is the third or fourth most popular form of renewable energy. It ranks behind solar and wind power in some cases and behind hydropower in many studies.

The first geothermal plant was actually built in Italy in 1911, so geothermal has been considered for home and commercial use for quite a while. Today, geothermal plants thrive in only some areas of the United States, while private geothermal systems help homeowners to take advantage no matter what the local utility company uses.

The Future of Geothermal

In any case, it’s a popular renewable energy source because the heat deep underground will almost always be around. Today, geothermal wells do rely on quite a bit of electricity to pump heat (although this is minimal compared to what a heat pump or electric furnace needs to run).

We keep getting better and better at using geothermal energy, and the cost of geothermal is going down as a result. That said, you might expect geothermal energy to become more common in the future, but you can take advantage of its benefits today.

Converting your home to geothermal energy means installing some hefty new equipment. An underground loop system circulates water or a water-coolant combination to allow for heat absorption and release. In the summer, the system releases heat energy into the earth, and in the winter, the unit absorbs heat energy from the earth for heating.

The installation is bulky. You will need a lot of space on your property, and you should be prepared to have a deep well drilled. Once the equipment is in place, though, you won’t need to replace it for decades (most likely). And the indoor heat pump equipment will last a long time as well. You should notice a drop in your bills almost right away!

Learn more about using geothermal energy near Pittsburgh, PA. Contact Boehmer Heating & Cooling to get started on the future of energy!